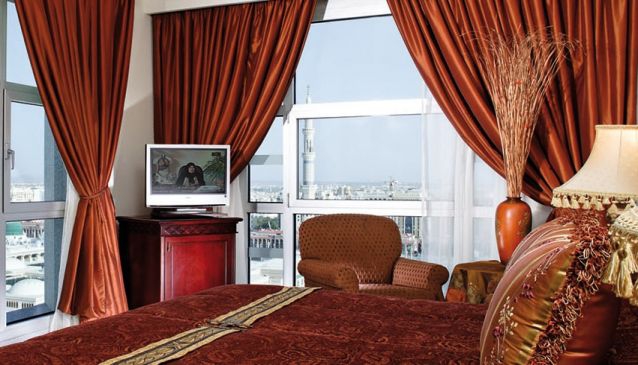 Medina's largest hotel, the Anwar al Madinah Mövenpick, sits in the centre of the commercial district. It is a five-star hotel located next to the Prophet's Mosque, and is in close proximity to many of Medina's attractions. The hotel is suitable for families, solo travellers and business travellers alike, and is a shopaholic's paradise due its direct link to the neighbouring shopping mall.

Inside, the hotel offers five star facilities, with 1295 luxury guest rooms - 179 of which offer fantastic views of the Haram. Each room is fully equipped with a desk, refrigerator, satellite television and a telephone. The hotel houses four different restaurants on-site, each of which offer flavours and cuisines from around the world. These include Moroccan, Persian, international favourites and delectable sweets and treats in the Rotana Cafe. Additionally, room service is available 24-hours. Other facilities include meeting and conference rooms, and on-site underground parking.