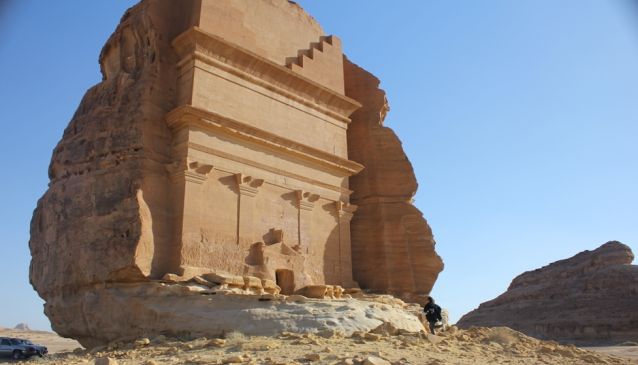 The ancient Nabatean town of Mada'in Saleh lies in the north-west of the Arabian Peninsula, flanked by mountains to its east and west. For centuries, the town has gathered dust and provided occasional shelter to passing tribes. Which is to say, it's been well-preserved; and now it's Saudi Arabia's first UNESCO World Heritage site: a city carved into the rock face of some spectacularly sculpted and rugged mountains.

Like the other Nabatean wonder Petra, which is 500 kms to its north-west, Mada'in Saleh was settled by the hardy Nabateans in the pre-Christian and pre-Islamic era. The Nabateans engineers created incredible waterway systems along the rock face.

Mada'in Saleh is located in the Madinah region of which Medina is the capital. Non-Muslims are allowed to pass through Medina airport, but not enter the city center. Foreigners need permits to enter Mada'in Saleh.